Good morning readers! Can I tell you about the most excellent time I had this weekend? Well, for this blog post to make sense, I need to tell you a little bit of how I grew up. No, scratch that. Let me tell you about my dad.

My dad was enlisted in the navy on an aircraft carrier during the early ‘80s. He toured all over the world to places including Japan, the Phillipines and Africa. Our house was filled some of his treasures from those places: trays with lotus flower wood veneer cut-outs, a carved giraffe, a wood ship made from a pinecone. There are also plenty of pictures of me as a child wearing japanese silk pajamas, carrying around the Japanese version of a Cabbage Patch Kid (also in matching pajamas). It was neat to have things in our house that no other kid had. I think it was from his world travels that my dad learned how to barter. Don’t expect to make a deal with my dad, unless you know he will always come out with the better part of the bargain.

On Saturday mornings my dad would disappear for hours, and would come back with truckloads of stuff. Living in a Navy town, many people would come and go, and as a result there were always yard sales to patron. My dad’s strategy was usually something like “you want $1 per shirt? How about I buy the whole box of shirts for $6? As a result of this, I was gifted many clothes, which were not my size; however, we did score quite a bit of furniture. In fact, until just about four years ago, every single piece of furniture in my parents’ house was from a yard sale.

As I grew older my dad started going to flea markets. He scoured the San Joaquin Valley for all the flea markets could offer. It was at these flea markets my dad began his hobby of coin collecting. It’s been his favorite hobby ever since.

My dad was in Los Angeles for the weekend, and the timing couldn’t have been more perfect. He happened to arrive right when the largest flea market west of the Mississippi was scheduled. Of course, we had to go to the Rose Bowl Swap Meet! My dad has his own strategy when it comes to swap meets. He likes to do a “once over” of the entire area, see everything he would possibly like to purchase, and then go back and haggle for the items he wants most. He began his rounds, and quickly got disoriented. It became clear my dad would not be able to see everything at this flea market. In fact, it would probably be impossible for his to see an eighth of all the things in the market by just making a quick once over. THIS PLACE IS HUGE! Here are some things we learned rather quickly.

1. Get there early, but not too early. There are several different kinds of tickets you can buy. VIP admission is between 5-7am for $20.00, early admission is from 7-8am for $15, express admission is from 8-9am for $10.00, and finally, general admission is from 9am-4:30pm for $8.00. A lot of vendors aren’t even open until 9am, so the earliest admission I would buy would be Express to snap up some of the best stuff.

2. There’s no shade, be prepared. Bring your own water (unless you want to pay $10/bottle), a hat a sun umbrella, sunscreen, whatever you can remain hydrated and unburnt. Dress comfortably. Wear sneakers, and if it’s a hot day, something that will breathe and stay cool all day long.

3.  Know your limits. Bring measuring tape, and measure the space inside your car. If you end up buying something that’s too big, don’t worry. There always movers around who would love the business of moving your new-found treasure.

4. Never pay full price. The vendors at the Flea Market are there to barter. If the price they give you is too high, tell them what other price you had in mind. The vendors begin packing up their goods around 2:30pm, which is prime time to get the best price out of anyone who doesn’t want to lug unsold good back from where they came from. 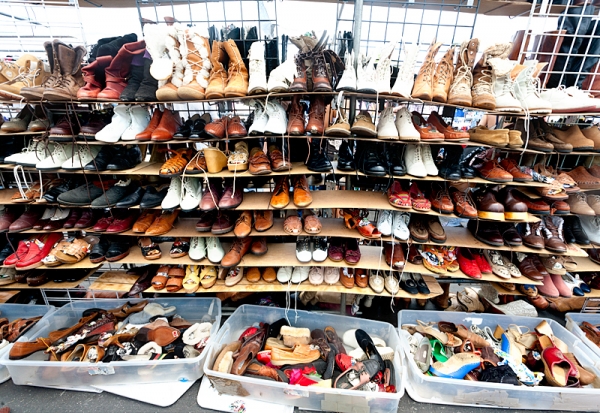